"Special thanks to Rod and Denise Bridgman. You guys have turned Sealy Flats from an abandoned old building into one of THE prolific blues clubs in the U.S. Your continued work and determination keeps the BLUES ALIVE! True Blues Lovers True Blues Clubs.

San Angelo Blues Society, you guys are a great organization and you have stood behind us for years, allowed us to complete in Memphis at the IBC for 5 years, and continually support our shows. AGAIN true blues lovers keep the BLUES ALIVE!" ~ Jeff Strahan

On Friday, October 19, Jeff will release CD number 8, "Live at Sealy Flats."  The release party will be held at Sealy Flats, located in San Angelo, TX. Sealy Flats is an amazing venue and great supporter of live music.  Rod and Denise Bridgman, our close friends and owners of the venue, are dedicated to "Keeping the Blues Alive" and do a tremendous job of it. If you love the Blues, I encourage you to visit Sealy Flats and the Blues Inn... our favorite little Blues club in Texas!~ Lois Lane 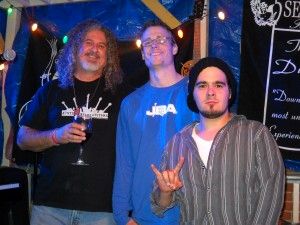 Review ~ Blues Blast Magazine (April 4, 2013)
The CD is a rocking good time. It probably falls into the rock mode more often than not, but it also includes some deep felt blues. They rock itout after the intro and then go into a church blues mode in the "Gospel Into-Smoke Filled Room." Nice opener for the show and CD. "Killer" is a bluesy rock sort of ballad. "Champagne and Reefer" takes the blues into the stratosphere with a series of huge guitar solos and lasts over 10 minutes as Jeff has a ball with this one. He quickly follows with "Your Funeral My Trial" where he stays with the blues and gives the crowd some thrills with his guitar work.

In the second CD he opens with a bluesy slow rocker “Love to Be a Hippy” and he tells us how he “loves to be a hippy but his hair won’t grow that long” and plays the pedal well as he wails on his axe. “”Cooler Than Cool” is a patriotic number and he dedicates it to our troops and he mixes blues and rock as he testifies to what he sees as our greatness as a country. “Dirty Dishes” gets turned into a big blues harp and guitar production, much to the crowd’s delight. It’s the first and only time we get treated to the harmonica and it jams as Jimmy “Slim Jim” Rose makes an appearance. “Hope and Faith” has Jeff testifying to the crowd in a big way as he sings and the guitar responds; it some damn fine slow blues he lays on us here. Blues mixes a bit as he rocks in “Love Me Right Now” but “Texas Flood”brings us back to the blues as Strahan thoughtfully picks and plucks as he wails on the song that SRV made famous. It’s a darn good cover. Some barrelhouse piano opens “She Only Hates Me” and continues as the focus as Strahan belts out that he’s glad his girl only hates him when he’s drunk. He concludes with a raw and Texas styled “Thrill Is Gone,” taking this out into the mesa and dirtying up the guitar and vocals to “Texify “ BB King’s anthem; a very cool cover.

The remaining tracks lend themselves to more of a country and straight rock flavor; they are equally good and Strahan’s show mixes genres well to keep the listeners happy and liking what they hear. Strahan’s music is southern rock, blues, country, folk and more all rolled into one. If the Marshall Tucker Band had come from Lubbock, Texas instead of South Carolina, they might have sounded a lot like this. From the blistering guitar to the laid back lyrics, the music oozes Texas and sounds mighty fine. Pure blues traditionalists may balk here as the rock predominates, but it is a fun ride so latch your seat belts tight, hold on and enjoy the ride!

If you are looking for some great blues influenced rock done up hot and spicy Texas-styled, you need look no further. And if you are a fan of big guitar solos and a band that can jam with the best of them, this will make your day. Strahan delivers the goods and plays to the appreciative and loving crowd. He’s a power guitar player and singer who can deliver a great performance. The CD is a lot of fun and served as a fine introduction for me to this hot Texas artist and his band!" ~ Steve Jones